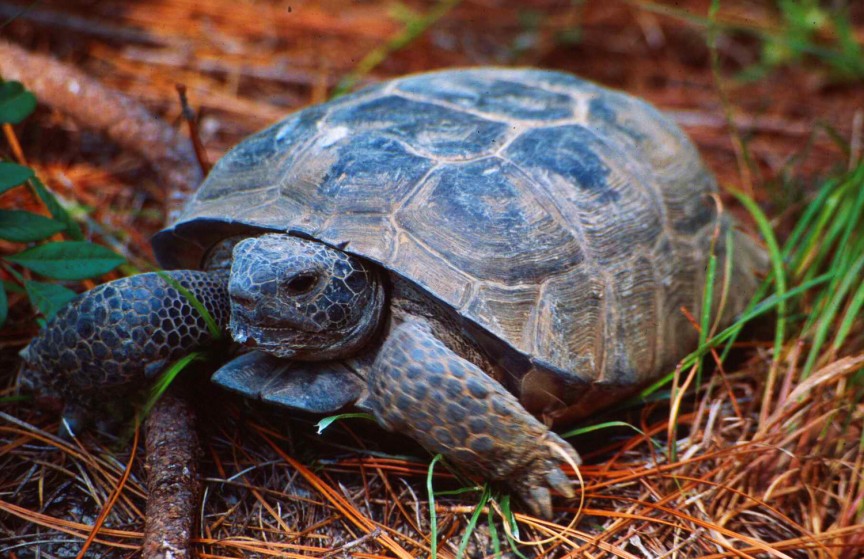 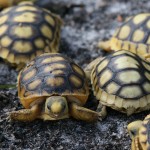 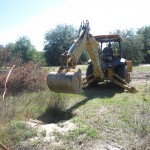 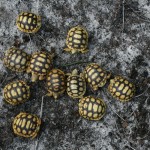 The gopher tortoise is a large (8-15 inches length), terrestrial burrowing turtle with large, shove-like forelimbs and small elephantine rear feet. Gopher tortoises grow slowly and may require 18-20 years to reach sexual maturity in northwest Florida and southern Alabama. Adults are long-lived and have few predators as adults other than humans, raccoons, and large canids (dogs and coyotes). Eggs, hatchlings, and juveniles are eaten by a wide variety of mammals, birds, reptiles, and fire ants. It is estimated that only 1 in 100 hatchling tortoises will live to become a breeding adult. With such high juvenile mortality and low levels of recruitment, populations will decline with even small increases in adult mortality.

Highest densities of gopher tortoises are in well-drained, deep sandy soils having a relatively open canopy and sufficient forage plants such grasses and forbs. Longleaf pine-wiregrass sandhill habitat supports the best populations but they may also be found in scrubby flatwoods and early successional habitats such as old agricultural fields. Managed open pine plantations (less than 40 sq ft. per acre basal area) that have been thinned and frequently burned may provide suitable habitat. Gopher tortoises will avoid or abandon dense hardwood and unburned pine/hardwood habitats with dense brushy midstory.

Direct habitat loss, habitat degradation, and overexploitation of tortoises for their meat by humans has caused a serious range-wide population decline. In northwest Florida, most populations were extirpated or severely depleted due to overharvest from the 1930’s – 1990’s. Population declines are also caused by historic and ongoing conversion of natural sandhill habitats to dense, even-aged pine plantations, agricultural land, and close-canopy, mixed hardwood forest due to fire exclusion. In Florida, loss of habitat from residential and commercial development is currently the primary threat to gopher tortoises.

Because of a significant range-wide population decline and loss of habitat, the gopher tortoise is listed as a threatened species in Florida and is a candidate for Federal listing as a threatened species. Despite being a protected species in Florida since the late-1980’s, from 1991 to August 2007, Florida issued incidental take permits to developers that allowed them to bury tortoises without relocating them, in exchange for habitat mitigation fees that were used to purchase gopher tortoise habitat elsewhere. This failed policy resulted in the loss of an estimated 110,000 tortoises and a net loss of gopher tortoise habitat. New FWC permitting requirements in 2007 eliminated the incidental take permit policy and replaced it with a new permitting system designed to protect suitable, managed habitat and require translocation. However, a significant unresolved issue is that the incidental take permits issued prior to August 2007 have no expiration date (grandfathered) and although many of these lands currently remain undeveloped, an estimated 22,000 gopher tortoise will be legally entombed in the future as these lands are developed. FWC now allows a modification to the original incidental take permit to allow for off-site relocation. However, most developers will not choose to pay any additional cost to relocate the tortoises on their land as they already paid significant fees for the original incidental take permits.

In an effort to restore gopher tortoises to Nokuse lands, as well as to help save this keystone species that has been entombed on scores of new developments across Florida, Nokuse has embarked on a large-scale private effort to rescue and relocate gopher tortoises to many areas of the property. Because Nokuse supports so much well-managed, xeric upland habitat, often with few existing tortoises due to past habitat disturbance and direct removal/consumption of tortoises, we have made Nokuse lands readily available to thousands of displaced tortoises. In fact, to date we have relocated 3,800 gopher tortoises since May of 2006 in a partnership with the Humane Society of the U.S. and these “rescue” relocation efforts are ongoing. In 2014, Nokuse entered into an unprecedented partnership between the St. Joe Company, The Humane Society of the US, and Florida Fish and Wildlife Conservation Commission to increase our effort relocate gopher tortoises from development sites throughout Florida to our preserve. These tortoises were doomed on the development sites but will now live long lives as part of a permanently protected, breeding population.