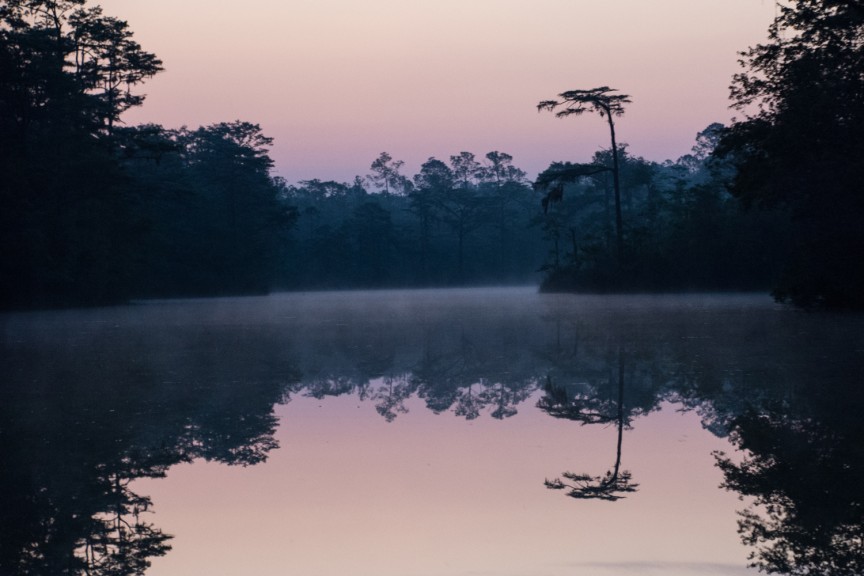 Nokuse Plantation is converting plantations of sand pine, loblolly pine, and slash pine back to the historic longleaf pine communities. On most sites, the off-site pines are clearcut and longleaf pine is planted. Historic aerial photos (1941) help to determine the pre-silviculture natural communities. On sites that were historically wet prairie or open wiregrass-dominated savannas, no trees are planted and fire is re-introduced to enhance herbaceous groundcover.

From 2004-2014, we planted 8 million containerized longleaf pine seedlings on 24,000 acres at an average of 300 seedlings per acre. Seedlings were hand planted with a random (non-row) pattern and spacing.

We have started the process of restoring the groundcover plants of the longleaf pine-wiregrass sandhill communities. The diverse understory component is key to restoring the function to the longleaf pine ecosystem. This plant diversity provides habitat for wildlife, pollinator food sources, and the fine fuels necessary for the fires that drive the ecosystem. Federal and state agencies, conservation organizations, and private landowners are increasingly aware of the need to consider understory communities in longleaf restoration projects. Quality understory is being restored in sandhills and flatwoods in two ways: 1.) Enhance existing understory species with appropriate land management (prescribed fire and hardwood removal) and 2.) supplement with plant or seed material. This supplemental material can be obtained from commercial producers, state plant nurseries, or appropriate donor sites. However, the supply of commercially available plant material does not yet meet the demand of partners to restore impacted lands. Therefore, to meet this demand for local ground cover material, we have established a 40 acre production field that will be used to produce seed of the dominant plant species found in the longleaf sandhill community. Plants include: 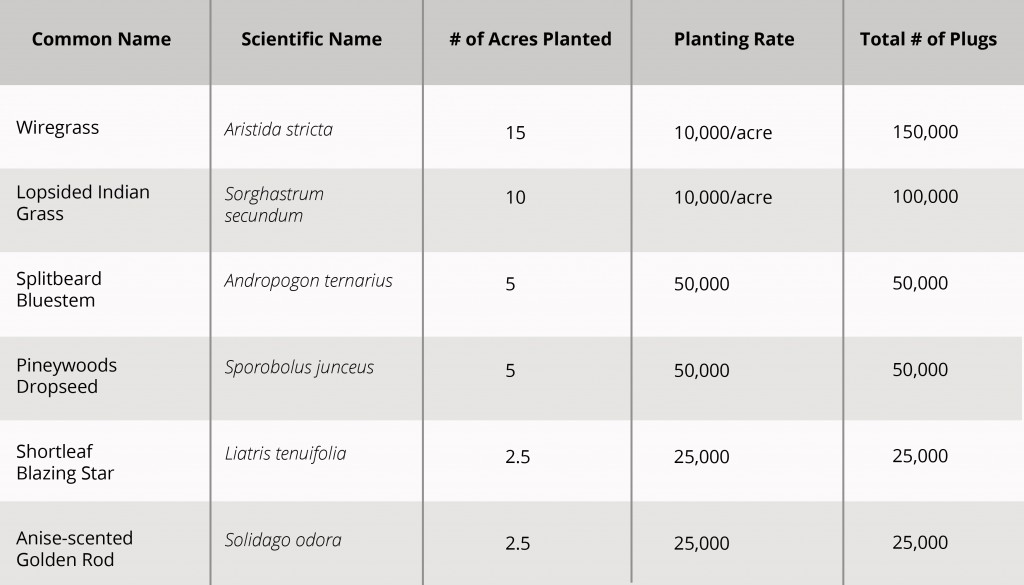 The gopher frog (Rana capito) is a rare species and is listed as a State Species of Special Concern in Florida. It breeds in fishless, semi-permanent ponds and is dependent on gopher tortoise burrows, stump holes, crayfish burrows, and other burrows for shelter. Gopher frogs were extirpated from Nokuse Plantation due to large-scale agriculture and silviculture. We plan to restore the natural hydrology and vegetation of these ponds and reintroduce gopher frogs using egg masses from nearby breeding sites (e.g., Pine Log State Forest, Eglin AFB).

Nokuse Plantation and The Orianne Society are partnering to conserve the Federally threatened Eastern Indigo Snake (Drymarchon couperi) and their habitats. They are developing a Captive Propagation and Reintroduction Plan that establishes basic protocols for propagating eastern indigo snakes, ensures communication and coordination among partners prior to reintroduction, identifies source populations, identifies regions for reintroduction, identifies areas for habitat restoration, and identifies existing federal and state policy requirements for permitting reintroduction and augmentation actions.
The goal of their Captive Propagation and Reintroduction Program is to reestablish extirpated populations or augment existing populations of eastern indigo snakes. The Orianne Society is designing facilities where the snakes will be bred and raised in preparation for release to areas in the Florida Panhandle and southern Alabama where indigo snakes have declined to such low densities it is thought they may be locally extinct.

Feral hogs are trapped throughout Nokuse Plantation but we specifically target areas where they are causing the greatest damage such as seepage bogs, steepheads, and wet prairies.

There are five potential breeding ponds of the reticulated salamander, Ambystoma bishopi, in Critical Habitat Unit RFS-6, Subunit A, Walton County, Florida. Four of these ponds occur on Nokuse Plantation Conservation Easements, with the fifth pond in close proximity on an adjacent private tract. Salamanders were last documented in the breeding pond on the adjacent tract in 1993. This breeding pond has the best ecotone of the five ponds, consisting of a dense groundcover layer of wiregrass and other graminaceous plants. Historic breeding ponds consisted of an open canopy (devoid of thick woody midstory) and herbaceous groundcover plants. Ambystoma bishopi lays its eggs on stems of grasses in the pond margin and the larvae develop in the flooded ecotone of the pond. An examination of a 1941 aerial photograph of the site reveals an expansive, open, treeless ecotone surrounding the breeding ponds. The uplands surrounding the breeding ponds in Unit RFS-6A were converted to slash pine plantations in the 1950’s. On the west side of SR81, uplands were planted but not intensively site prepped or bedded and some wiregrass remains. On the east side of SR81, the uplands were more intensively site prepped and bedded in the early 1980’s by Champion Paper Co. Some ditching was also conducted to partially drain the ponds so that pines could be planted closer to the ponds. All of ponds have suffered from a dense hardwood and pine midstory that has grown in the original pond margin and ecotone doe to a lack of natural or prescribed. Thus, most of the wiregrass and graminaceous plants have disappeared from ecotone from a combination of shading and mechanical site prep resulting in poor breeding microhabitat for Ambystoma bishopi. We are restoring the pond margins and ecotone of four breeding ponds on Nokuse Plantation using the following methods: (1) prescribed fire, (2) mechanical and hand removal of the hardwood/pine midstory in the ecotone, (3) removal (backfilling) of any ditches and, (3) planting wiregrass plugs in the pond margin and ecotone. Nokuse Plantation has received grant funding from U.S. Fish and Wildlife Service to purchase wiregrass plugs and plant them in 2014-2015.